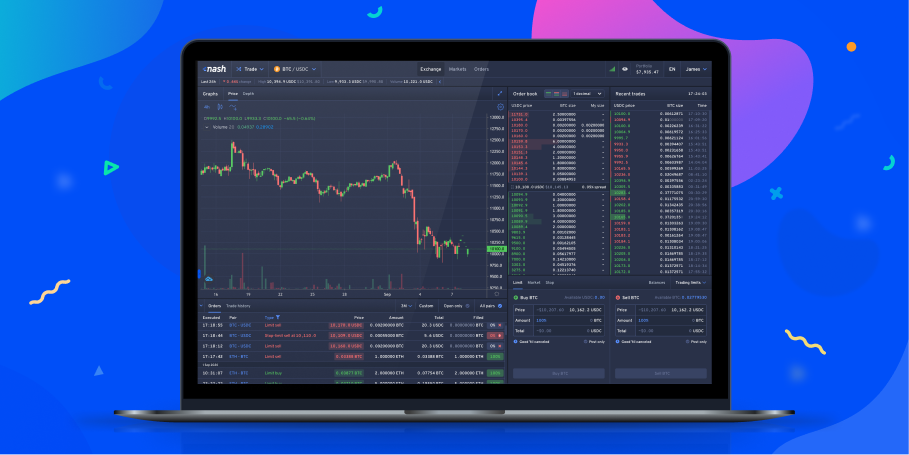 Crypto enthusiasts have always been critical of centralized exchanges. Giving up control of your private keys runs against the basic principles of blockchain. Billions in assets have been stolen from centralized exchanges, to say nothing of shady business practices frequently making the news.

Existing DEXes have their place, but they just aren’t ready to compete with centralized exchanges. They lack the features required to attract both high-volume traders and crypto newbies.

Nash is a revolutionary non-custodial exchange set to change this picture.

The company has developed new technologies to implement a cross-chain second-layer exchange that rivals the speed and functionality of centralized exchanges without taking control of user assets.

Nash in a nutshell

The result is a centralized-like experience with an unparalleled security profile. In fact, Nash’s unique technology provides a full security lifecycle for the first time in the trading industry: funds are not at risk, even if both Nash and a user’s servers are compromised.

Besides its exchange, Nash also offers an all-in-one platform for digital assets that never takes custody of user funds. Services include:

Nash has a strong focus on providing an excellent user experience, accessible both to professionals and new users.

What’s more, Nash’s services are available on both desktop and mobile. 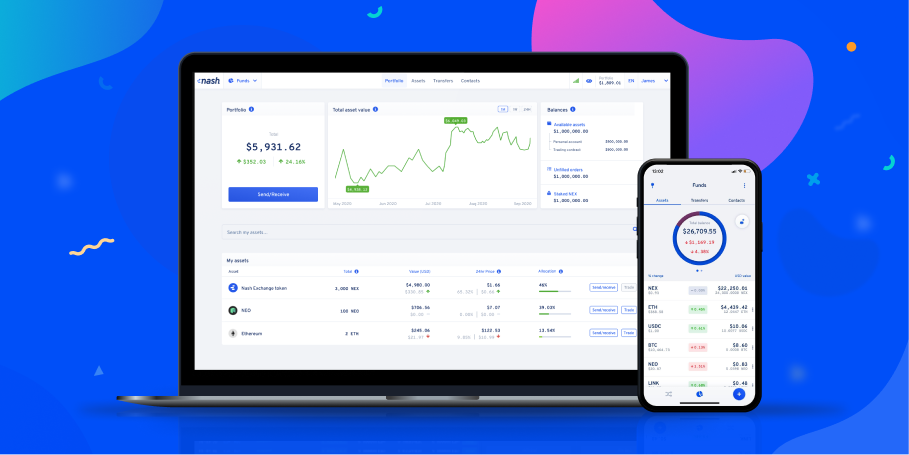 Since its mainnet launch one year ago, Nash has been testing, expanding and iterating on its platform, ironing out bugs and adding new features to achieve product/market fit.

This is good business sense – as is confirmed by Jeff Bussgang, a lecturer at Harvard Business School and founding partner of the venture capital fund Flybridge, who joined Nash co-founder Fabio Canesin on the Beyond the Chain podcast to discuss business development and growth.

Nash itself is regularly audited by the Financial Market Authority (FMA) of Liechtenstein, ensuring that trading practices on the exchange are fair.

How it works #1: Non-custodial state channels

Nash operates non-custodial state channels, similar to Bitcoin’s Lightning or Ethereum’s Raiden, which interact with a high-speed off-chain matching engine. The matching engine manages the balances of state channels on multiple blockchains, updating these as trades are made and writing back to the blockchain periodically. This overcomes speed bottlenecks around settlement, as well as the issue of blockchain intercompatibility.

Since all transactions, including trade orders, must be signed with a user’s cryptographic signature, Nash’s system never takes control of user funds. 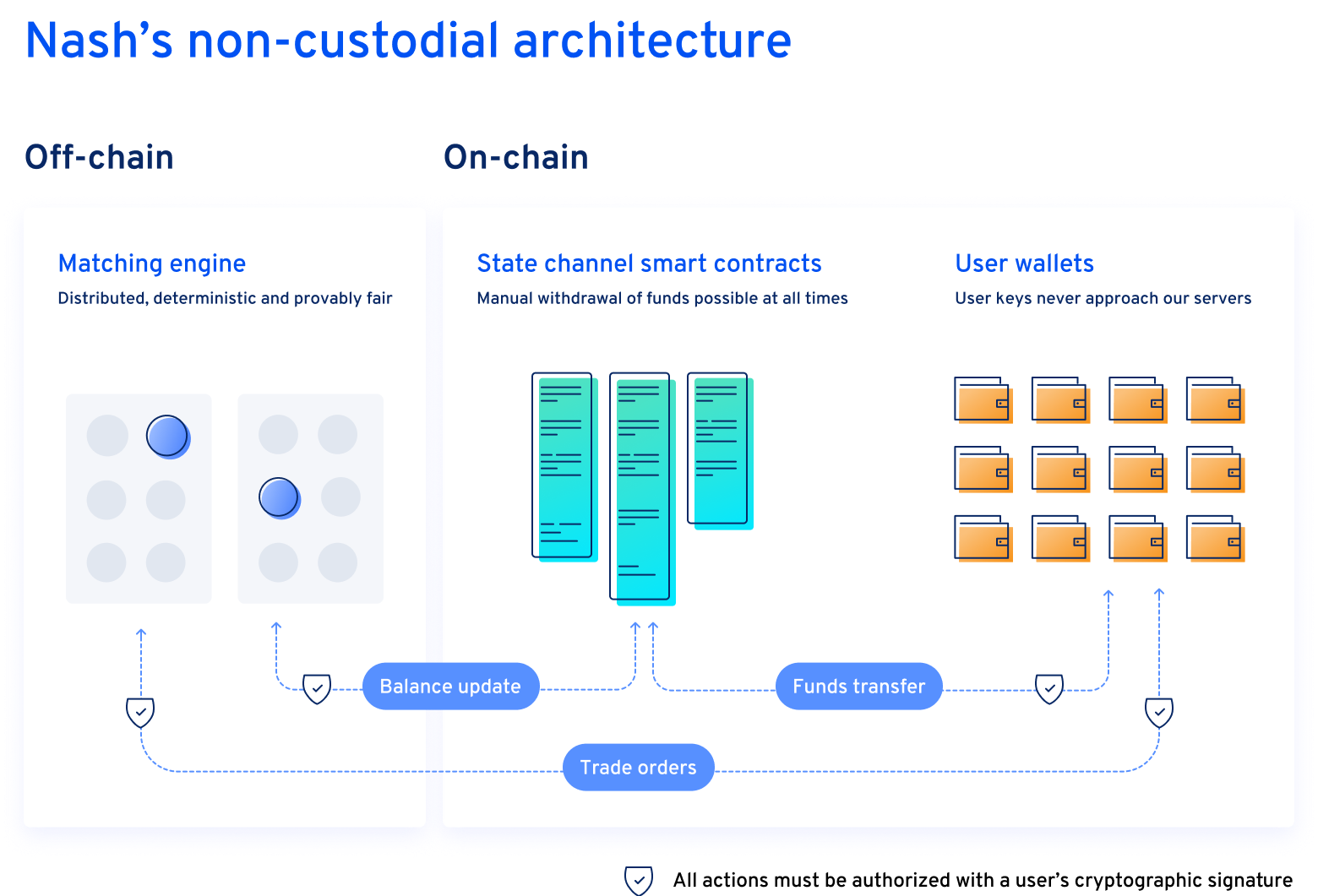 Nash’s solution allows them to avoid “token wrapping” entirely. Wrapping is essentially custodial, because a user’s real Bitcoin is held by a custodian while they trade a derivative like wBTC on the Ethereum chain. By contrast, all tokens traded on Nash remain on their native chains.

Nash is also able to avoid atomic swaps, a non-custodial but impractical solution that requires the monitoring of multiple blockchains over time. Atomic swaps are not compatible with order book–based markets and so are of no interest to high-volume traders. Orders placed above or below the current price level constitute most of the volume on a large exchange.

Thanks to its unique off-chain matching engine, Nash has been able to achieve centralized-level trading performance, offering the ability to place and cancel orders in under 20ms. This is crucial for algorithmic traders and market makers, who constantly update their live orders in response to changes in the order book.

For the first time, non-custodial Bitcoin trading is possible on markets with order books – natively cross-chain and at industry-leading speed.

You can listen to Nash co-founder Thomas Saunders and backend engineer Jan Huwald discuss the company’s state-channel solution and Bitcoin protocol on the Beyond the Chain podcast.

Other decentralized exchanges sign blockchain transactions directly with a user’s private key. This key is sufficient to do anything with all the assets in an account. Any amount can be sent to any address. Placing a private key on a server for running a bot is a huge security risk. It’s also incompatible with institutional setups, where individual traders are given their own API key with specific limits attached.

Nash gets around this problem by using MPC to generate blockchain signatures. Users can create multiple API keys, each with its own security policies.

Instead of signing transactions with one private key, Nash splits the signature process between two parties (Nash and the user), neither of whom can sign a transaction alone. The user can specify particular conditions for an API key, such as an address whitelist. Nash can then enforce these conditions: if anyone tries to use the key to withdraw to an address not on the whitelist, Nash will refuse to sign the transaction.

Centralized exchanges can generate individual API keys with their own security policies easily – but Nash is able to accomplish this in an entirely non-custodial manner.

MPC is currently used to power Nash’s APIs for algorithmic trading, but it will soon be extended to all areas of the platform – including everyday user wallets – offering hardware-level security for traders and holders at absolutely no cost. 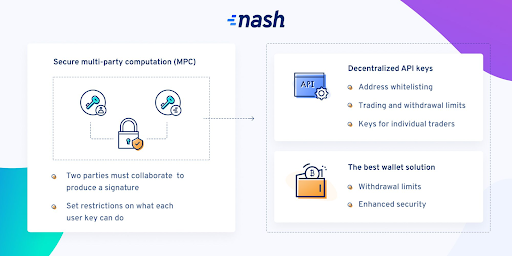 The Nash founders originally met in the open-source City of Zion group, developing core infrastructure for the NEO blockchain like the Neon Wallet, NEOSCAN explorer and neo-python.

Nash believes that open-source software, when correctly handled, encourages transparency and ecosystem growth, both of which are crucial for the success of decentralized finance.

The company has open-sourced its protocol and client SDK. This allows anyone to build on the Nash system, providing third-party interfaces. More importantly, it lets anyone verify that Nash is non-custodial. Users can check for themselves that their private keys never leave their machine.

In addition, Nash has initiated and continues to sponsor OpenLimits, an ambitious open-source project aiming to create a new industry-standard API implementation for secure, correct and high-performance cryptocurrency trading. OpenLimits will make it both simple and secure for trading bots or clients written in a number of languages (e.g. Python, Java, Node.js and C#) to interact with leading cryptocurrency exchanges.

In 2018, Nash raised over $10 million from leading venture capital firms and over $20 million in a public security token offering of the revenue-sharing Nash Exchange token (NEX). NEX is approved by the Financial Market Authority (FMA) of Liechtenstein, protecting investors from fraud and market manipulation.

Holders can stake NEX tokens to receive a share of revenue generated by Nash services, including the exchange, Nash Pay and Nash Cash. Dividends are paid out every 24 hours in BTC, ETH, USDC and other coins traded on Nash.

NEX has simple tokenomics following a dividend discount model. Trading on Nash generates fees from taker volume (maker orders have no fee). A share of these fees is then distributed to NEX stakers in the form of dividends. As a result, a fair price floor for the token can be calculated based on the exchange’s volume.

13.6 million out of 50 million NEX are already staked.

If you’re interested in Nash, now is the perfect time to get started. The company just launched a new referral program that promises 50% more commission than competing public programs.